Ocean City, NJ  –  Participants in Ocean City’s annual New Year’s Day Run and Ocean Dip will have a new reason to take the plunge this year as the John R. Elliott HERO Campaign partners with the city to promote the use of designated drivers.

It’s all part of the Ocean City’s 23rd First Night and First Day celebrations, which begin New Year’s Eve with the city-wide festival of family activities and fireworks, followed by the First Day HERO Run and Plunge on the beach and Boardwalk. This year’s event also marks the beginning of the HERO Campaign’s 15th anniversary year.

“We are proud of Ocean City’s longstanding relationship with the HERO Campaign,” stated Mayor Jay Gillian. “We welcome its participation as a charitable partner in our annual First Night and First Day festivities, which are all about safe family fun.”

The run and plunge, presented by Shore Orthopaedic University Associates in Somers Point, will seek to raise funds and awareness for the HERO Campaign in support of its mission to prevent drunk driving by promoting the use of safe and sober designated drivers.  “We have supported the HERO Campaign since its inception and are proud to make this important organization a major focus of our philanthropic community involvement,” stated John R. McCloskey, MD, senior partner for the regional orthopaedics group. “We share their commitment to saving lives and making our community a safer place to live.”

Registration for the HERO Run and Plunge begins at 11:30 in front of the Music Pier. Starting time for the 5K Boardwalk Run is 1 p.m., followed by the HERO Plunge at 2 p.m.   Although the plunge has no entrance fee, participants contributing $20.00 or more, and signing a designated driver pledge and release form will receive a long-sleeve commemorative HERO Campaign shirt and membership certificate.  Online pre-registration is available at www.herocampaign.org  or at (609) 626-3880

The HERO Campaign was established in memory of Navy Ensign John Elliott of Egg Harbor Township, NJ.  Elliott was killed in a head-on collision with a drunken driver on July 22, 2000, two months after graduating with merit from the United States Naval Academy.  He was driving home for his mother’s birthday celebration at the time of his death.

“We are looking forward to partnering with Ocean City and Shore Orthopaedic University Associates on these iconic First Day events, which promote family fun and responsibility,” noted HERO Campaign chairman Bill Elliott, John Elliott’s father.  He added that the HERO Campaign has been proud of its ongoing association with Ocean City over the past 14 years through First Night, the Night in Venice Boat Parade, Miss Night in Venice Pageant and its annual HERO Walk.

Michele Gillian, chairman of the First Night/First Day Committee echoed Elliott’s comments, saying that the HERO Campaign has been an important partner over the years for its alcohol-free festival and its emphasis on personal responsibility.

First Night gets underway on New Year’s Eve, Wednesday, December 31, from 4 p.m. to midnight, culminating in a firework display over the Boardwalk. The cost is $20 per person, children 2 years and younger are free. Buttons can be purchased at www.firstnightocnj.com, or by calling 609-399-1412 and are available 10 a.m.-4 p.m. daily at Stainton’s Square, Eighth Street and Asbury Avenue.

Children will be delighted with events at the football field, Sixth Street off the boardwalk, and adjacent Sports and Civic Center including the world’s tallest snowman, a 30-foot tall bouncy; the Dixie Dragonfly Swing ride, fun for ages 5 and up; trackless train tide, the Peanut Elephant ride and pony rides from 5-9 p.m. 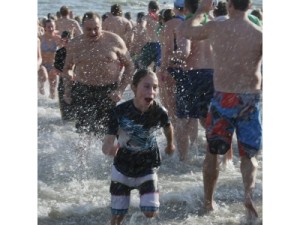